Rev. Proc 2014-11 (34%): The Form 1023-EZ submission date for these applications was more than 15 months after the date on which the IRS posted the organization’s automatic revocation for failure to file three consecutive 990-series returns.  Form 1023-EZ cannot be used for retroactive reinstatement under these circumstances.

Ineligible (4%): These applicants were ineligible to use Form 1023-EZ to apply for tax exemption. This includes, for instance, churches, schools, hospitals, LLC’s, and credit counseling agencies.

No Response (3%): Applicant did not respond to an information letter and the case was rejected as incomplete.

Other (16%): Aggregation of EZs rejected for other reasons, each of which accounts for less than 2%

Missing Required Fields (3%): Although pay.gov includes entry validations, some internet browsers allow the applicant to bypass these validations, resulting in incomplete submissions. The IRS is working to fix this.

Invalid EIN (29%): Form 1023-EZ is rejected if the applicant uses an incorrect EIN and the correct EIN cannot be determined based on IRS records.

Inaccurate Date of Organization (2%):  For organizations whose tax-exempt status was automatically revoked for failure to file a Form 990-series return for three consecutive years, Form 1023-EZ is rejected if the applicant indicates a date of formation that is inconsistent with IRS records.

The IRS recently released updated information about Form 1023-EZ processing over its first two years.   The information below, an analysis of the reasons why the IRS has rejected Form 1023-EZ, may be of particular use to organizations completing the Streamlined Application for 501(c)(3) Status.

During the time covered by the study, 4,152 Form 1023-EZ applications were rejected.  An organization that has its application rejected does not have the right to appeal the rejection, but may resubmit Form 1023-EZ or, alternatively, submit the long-form Form 1023.  41% of those rejected did, in fact, subsequently reapply. 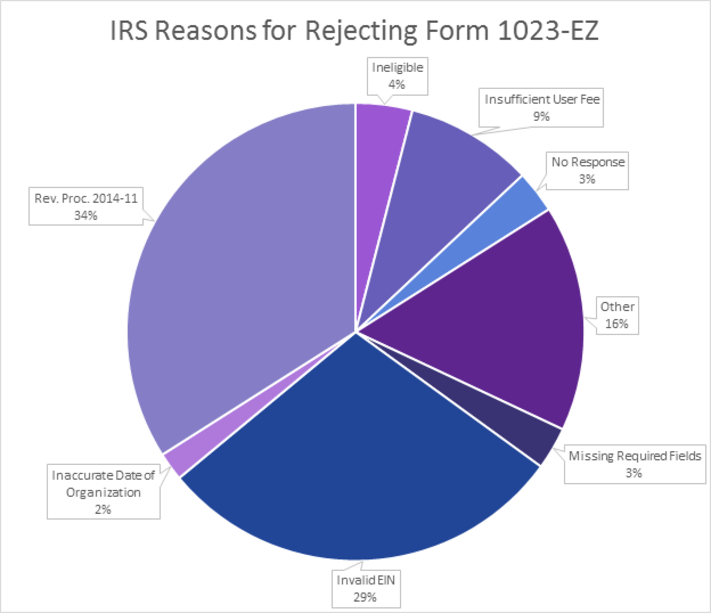