​Information About the Form 1023 Paperwork Chart

The information shown in the chart is drawn from Office of Management and Budget forms submitted to the OMB by the IRS whenever Form 1023 has been renewed.  Every Federal agency seeking OMB approval of a form must estimate of the number of people likely to use the form as well the average time needed to complete the form.

The 2016-2017 estimated nationwide paperwork burden for both Forms 1023 and 1023-EZ combined* is 4,759,190 hours.  This covers an expected 80,000 applications - 70% EZs and 30% long-forms.  Although the long form remains essentially unchanged since 2004, the estimate of the average time needed to complete the basic form has increased (based on public comment) from 105 hours (the time shown on page 24 of the Form 1023 instructions) to 168 hours.  The estimated time to complete Form 1023-EZ is still just short of 19 hours, as shown in the instructions for that form.

It did not seem worthwhile to keep updating the chart after the IRS issued Form 1023-EZ.  I note that the IRS declined to estimate the average time need to complete the new electronic long form.

Source: Office of Management and Budget webpage on Form 1023 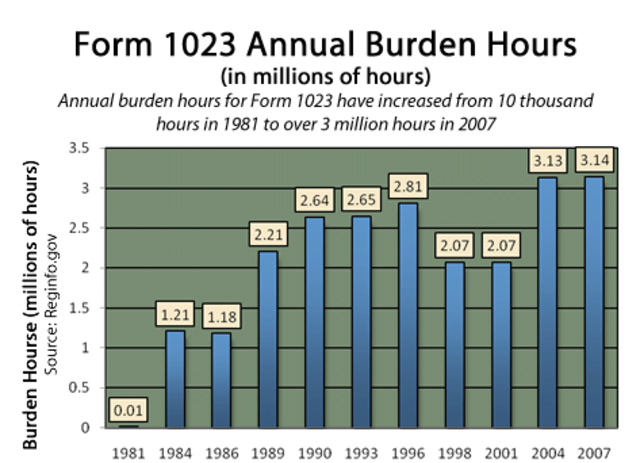